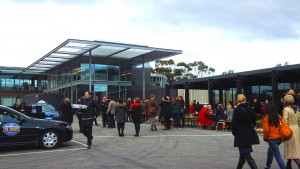 Museum of Old and New Art

AMA is all about exploring the world of arts marketing and bringing it to the local context.

In ‘The Story of “YOU”, presented at the APACA Conference in Hobart, Joel Tan clearly showed how to develop strong, meaningful interactions between customers and artists in a regional arts centre. Tan, the Director of Community Engagement for the Yerba Buena Center for the Arts (YBCA) in San Francisco, described the issues facing many U.S. arts centres. San Francisco arts organisations, like others around the country, are struggling with severe financial difficulties.

They suffer from dwindling audiences and increased problems in reaching the core audience group as the local area becomes gentrified by high-income tech workers, forcing the alternative population to move out. This gentrification, according to Rebecca Solnit, is“just the fin above the water. Below is the rest of the shark: a new American economy in which most of us will be poorer, a few will be far richer, and everything will be more homogeneous and more controlled and more controllable”.

As a result, a city universally known for its liberal culture is now the number-one city in the United States for wealth disparity.

So what does this have to do with marketing? It connects to the balance an arts centre must strike between the need to bring in a new audience and the need to maintain its own artistic integrity. Tan noted that the newcomers to the area may not be regular attendees at artistic/alternative events. He observed that the arts organisation should not vilify newcomers to the area but instead should embrace them and focus on delivering its programs to the new audience.

The YBCA is a facility that focuses on ‘personal and social transformation’ connecting with theatre and art. It has a 757-seat theatre and a 500-person capacity performance space. Part of the theatre marketing, encompassing both the entrenched goals and mission of the YBCA, is the all-access membership program called the YOU program.

Tan used real-life example of Henri Lawrence, a math teacher and an accountant, to illustrate the benefits of the program. The YBCA: YOU program moves away from the ‘transactional model’ as ‘[it wants] to make arts engagement the habit’ by having the audience have an experience aimed at ‘broadening and expanding one’s artistic and creative self. For $15 per month, members can access all YBCA’s films, performances, and galleries. The program is similar to Pandora or Netflix, but ‘YOUers’ (as they are called) get access to exclusive programs like book clubs, post-show events, and art making workshops.

Within this atmosphere, friendships are formed and views are exchanged. The YOUers also get an opportunity to work with a mentor to get deeper engagement and increased satisfaction. As Tan said, ‘it’s like having a trainer for your art life or a creative case manager’. What this means is deeper engagement with the artistic product. This linking with the brand of YCBA works to create demand. The deep engagement and understanding of the case was clear in Henri’s explanation of how he has deepened his artistic engagement.

One day, Henri was feeling frustrated in the galleries. Henri was frustrated because he wanted to connect to the art immediately and he just wasn’t. Sarah, sensing his distress, invited Henri to sit with her on the gallery floor as she listened. And he talked and Sarah listened. For a long while. Mostly not about art. They sat on the gallery floors and at the end of this session, Henri expressed gratitude for just being with the art and our Live Guide. Since then, Henri regularly attends exhibitions to sit, make time, and practice not knowing.

Deep engagement, like Henri’s, must be the future for arts companies to separate themselves from just another marketing message. I would argue regional companies have an opportunity to set up some type of YOUer arrangement with their theatre/gallery goers. They will need to break down the barriers of resistance in local towns, many of which are facing rapid growth (through industries like mining) or decline due to changes in town fortunes.

The Australian companies must always look to bring in new audiences. These new audience problems and opportunities pervade the Western global economy, with the same issues of engagement that appear in regional Australia also occurring in the American arts industry.

We need to redefine the way we look at audience: to activate and engage.