Newspaper still have a vital role in the arts industry marketing. I would like to start this entry with a scene from Orsen Wells’ Citizen Kane. The newspaper has an expansive history, from the penny daily of the 1800s to the prestigious broadsheet that brought down a U.S. President in the 1970s. The printed newspaper, like the Wells’ New York Inquirer in the clip, has the power to set the agenda in society. I will explore the dynamic charging role of the newspaper. It will examine the place of the newspaper as an important agenda-framing implement in society. I will look at this from a global perspective before narrowing in on Australian press issues. I will explore the role of the printed newspaper as an advertising and publicity source for the Arts Enterprise. Finally, I will look at the changing nature of the media in terms of a possible digital future.

The gate keeper theory relates to the way the media controls the flow of news to the audience. As can be seen in this image, there is a number of possible stories the media can report on, and the newspapers control which event they are to cover and deliver to their audience. They set the agenda by leading the news with detailed local stories and agenda-setting opinion polls. The Australian print media is an influential body as it still has a large control of the news cycle. The radio and television networks comment on the newspaper stories of the day in their morning news programs and in weekly review programs, such as in “What the Papers Say” The newspaper can be found in all types of locations: cafés, medical offices, and many others.

The agenda is still, to a large extent, controlled by the print media, and this will work forward into the future. This agenda-setting nature is celebrated in the newspaper industry’s publicity as it states, “The early morning consumption of newspapers puts them in a unique position to determine what is the key news on any given day”. The newspaper is repositioning itself to set the agenda rather than just responding to it. As the print media suffers from time lag to produce stories compared to online media, it relies on agenda-setting opinion and in-depth coverage. Like in the media regulations issue, the print media can set the agenda. For the Arts organisation, these newspapers can be a valuable source of publicity. The newspaper has gate keeping guides to local artistic events, gallery openings, and theatre events. This is especially true for the weekend papers, and artistic enterprisers needs to exploit the opportunity in printed papers into the future.

Although the printed newspaper still has a powerful position in society, its circulation and revenues are falling. The printed newspaper readership has been in decline for 30 years. A study in the UK found that people aged 15 to 24 read the newspaper 30% less once they discovered the Internet.

The younger the potential readers, the less likely they are to be newspaper readers. These younger people are ignoring the printed newspaper as a source of information. They are the key audience for the Arts. The key audiences for movie goers are the 18 – 39 year olds, but they make up a smaller percentage of newspaper readership. This means that Arts enterprises’ key markets may not be readers of newspapers and that energy expended in gaining publicity from this source may be wasted. The major Performing Arts companies have been stagnating in recent years. Even though theatre audience figures might not directly relate to the declining readership figures of newspapers, they do display that both audiences are seeking entertainment and information in different ways. Arts organisations need to respond to a changing audience if they are going have an impact in both an economic and social sense. 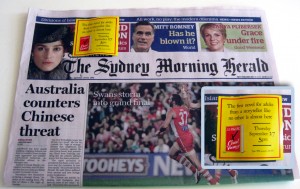 While the printed newspaper form has had circulation and revenue problems, it does have its advantages as a media form. The newspaper has a resilient nature as it has been under attack from other media forms since the 1930s. In the 1950s, while pessimists rallied in favor of television as the dominate form, Lester Markel (1956) revealed newspapers advantages. These advantages included print’s ability to get into depth in a story with multiple-page spreads, its portability and flexibility as a news delivery medium, and its ability to explore an issue over time. The newspaper still leads the agenda, and the tactical and portable nature of the paper means it will be an agenda-setting tool into the future. This tactile nature makes it a relatively cheap object that people can own, and this means promoters can use post-its to grab the attention of the reader. The readers can take the stick-on with them and purchase the product. The fiction writer J K Rowling’s publishers used the stick-on to advertise her new book. This approach is unique to the printed press and is a creative and practical form of advertising for the Arts entrepreneur. 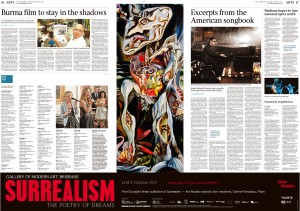 The printed newspaper has a number of features that have value to the Arts industry. Being able to insert color advertisement into the flow of the newsprint immerses the reader in the subject matter. People get absorbed into that more than when they take in information over other forms of media. This absorption means a higher retention rate of stories. The immersion of the surrealism image into the story is an attempt to capture the reader’s attention and challenge the reader. This insert into the Arts section of the newspaper means that the gallery is able to reach its intended audience in an eye-catching and informative manner. As people leisurely read these articles, a clear awareness can be created of the exhibition. Likewise, the printed newspaper contains stories that involve the Arts on a daily basis.

There is an advantage in Australia with the major print forms. While the newspaper industry worldwide in most developed countries is in a slump, there are conditions in Australia that make this nation’s conditions unique. The concentration of the Australian media, long the bane of the left-wing media commentators, means these press companies are in the position to address the market needs with large market penetration.  This power position gives the Australian papers value as news gate keepers and advertising mediums. Arts organisations cannot ignore the possibilities offered by the print form.

There is less day-to-day coverage of stories; this means less time to cover stories in-depth to explore issues and uncover events. This does give opportunities to the savvy Arts Media departments. They must realize that they need to produce almost whole news articles for the local papers, even with images. They can offer these exclusively to one printed paper. The Arts professional must realize the time constraints of the modern newsroom and allow for these when producing copy for an exhibition or production. The cuts in media time present opportunities to deliver an interesting product to the newsrooms that may become news stories.

If the Arts organisation is to exploit these publicity possibilities, it needs to recognize the paper’s need to position its masthead as an essential part of its local community.  One of the essential factors for newspaper survival is its strong identity with the community. The Arts enterprise should position itself to exploit this in the local media when devising its own potential news stories. In Newcastle, the two major organisations—the Civic Theatre and Newcastle Regional Gallery—both have corporate partnerships with The Newcastle Herald. While many newspapers were closing, Warren Buffet, one of the world’s most powerful investors, bought newspapers across the United States. Newspapers still have profitable and influential positions in many cities. Buffet said this is especially true in cities where the masthead is seen as the centre of the community. In this position, the paper can be linked into artistic events. The major problem is that these newspapers often have a reduced staff and are not covering local issues in a detailed manner. The Arts organisations can exploit links with the local community, and these stories can be newsworthy for the paper and great publicity for Arts organisations.

The world is changing; the world has always been changing, and the newspaper will change with it. The Arts industry needs to work with the printed medium and use it as the industry sees fit as its influence, though shrinking, is great.

How can your creative enterprise make the best use of the printed newspaper?

Arts Marketing Australia can help update your marketing approach. Contact me to find out more.