Arts Marketing Australia is a company dedicated investigating the best examples of marketing artistic organisations from across the world. This case study of an activist community displays how a low cost campaign can activate a community.

The case study is that of the activist Out of Order campaign. This campaign is a clear example of how a low cost social media campaign can cause an enormous amount of buzz in community. This is important because small artistic companies need to know how to exponentially grow its audience reach. While major arts companies may have the ability to employ marketing people and consultants, small companies need to learn from the simplicity and imagination of the Out of Order campaign. 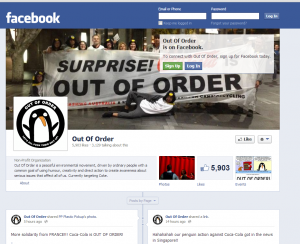 The Out of Order campaign revolves around the seemingly mundane issue of container deposit legislation (CDL) in the Northern Territory, Australia. The Northern Territory introduced a 10 cent refundable deposit on all bottles in 2012. Major bottlers, including Coca-Cola, took legal action against the Northern Territory government as it was seen as a restrict action for one state or territory to do so; therefore, it was deemed illegal. Even though the court action was successful, it resulted in a protest that was organised through social media. The Tasmanian-originated campaign goal was to heighten the public awareness of the issue and to affect the profitability of the company. To do this, the organisation came up with the simple idea of putting up an ‘out of order’ sign on Coca-Cola vending machines. These vending machines were selected because they were clearly branded and are the most iconic brand. The out of order sign could be easily printed at home and stuck on a Coca-Cola vending machine quickly, and it would deter business because it looked like a genuine out of order sign. The QR code gave a link to the campaign’s Facebook page. People were then encouraged to take a photo of the machine and post it on the Facebook page. Photographing the sign on the vending machine was a vital part as it linked the action to a wider group and shares ideas with Facebook friends. The Coca-Cola company’s legal action against the relatively small government of the NT gave the campaign a kind of David vs Goliath nature, and this was cheekily done again by the Out of Order protest. It had a low profile and low risk social disobedience action that was quite clever and amusing as the viewer got a vicarious pleasure out of seeing the sign produced in locations around the world. The campaign on Facebook was quite effective with over 5,000 ‘likes’ on Facebook, and reportedly over 800,000 reached in one week of the campaign.  Though largely ignored by the mainstream media for reasons not speculated in this report, it was covered in regional press and blogs.

The Out Order campaign had also worked with other activist campaigns. Greenpeace filmed a pro CDL, anti-Coca-Cola TV commercial funded by a crowd sourced social media and email campaign. The advertisment was initially accepted by Channel Nine and due for broadcast during the Friday night football, but was suddenly rejected by the station. After it was banned, the advertisement exploded on YouTube with over 800,000 views. The banning of the advertisement was possibly the worse result for Coca-Cola as it again perpetuated the David vs Goliath nature. 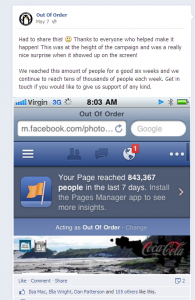 Coke planned its own campaign after facing a ‘barrage of negative commentary on Facebook  and Twitter’  with a $1 million giveaway. The company had a series of big red boxes that was to be revealed in prominent positions (like outside costumes house in Sydney Circular Quay). This was hijacked by a group of activists dressed as ‘Brenda, the Social Disobedience Penguin’. The effective demonstration only lasted a few minutes, but in that time a photo was gathered of the penguins holding the signs on the book. Thus a social media image was created.

This campaign displayed how passion, simplicity, persistence, and humour created an effective social media market buzz. Stunts can be a very effective way of cutting through the media clutter of the world today.

How can your audience be increased?

Arts Marketing Australia can help update your online approach to your artist product. Contact me to find out more.