Arts Marketing Australia is a company dedicated investigating the best examples of marketing artistic organisations from across the world.

This case study focuses on the British Museum’s exhibition, Grayson Perry: The Tomb of the Unknown Craftsman. The British Museum is known for its collection of antiquities, like the Rosetta Stone and mummies. In 2011, the museum put on a major exhibition for the Turner Prize winning artist Grayson Perry.  Perry, a larger-than-life character, is known for his ceramic vases (and his cross dressing). The campaign was one that was to launch the British Museum a contemporary art venue for major exhibitions as well as to get 60,000 people to spend at least 10 pounds on the exhibition. The campaign included extensive focus group research into the three main target audience segments developed from Morris Hargreaves McIntyre’s Culture Segments and focused on three main target segments and how they might be reached. The research showed that with this segmented approach, arts organisations are able to effectively build an audience as these markets have an inclination to patronise the arts. The concept was to create buzz around the exhibition to inspire word-of-mouth discussion around it. Word-of-mouth is still the most powerful tool to encourage purchases. The idea was to look at the various segments of the culture market and to target social media and other marketing tools into strategies that would appeal to a particular group. 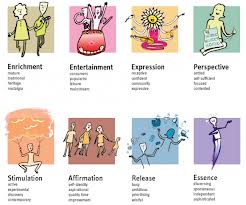 The three target segments identified were the Expression, Stimulation and Essence groups. The Essence segment had an intellectual approach to art and were familiar with Perry’s work. They were wary of marketing strategies and preferred self-discovery. The marketing approach was to compliment the ‘independence and sophisticated tastes’ of this group.

The Expression segment had not heard of Perry as an artist or thought of him as ‘self-promoting and controversial’. They liked the idea of him as a skilled craftsman, and they wanted to be part of the controversy and debate that was developed through reviews and blogs.

The Stimulation segment had a high awareness of Perry; embracing his controversial personality, and they were frequent users of social media. To target this group, the campaign was to embrace this desire for them to try something new and engage them early in the event timeline,  knowing that they could become social catalysts for the exhibition.

For this exhibition, it was decided that the cultural segments would be targeted a different times in the program by different marketing messages and channels.

The campaign was to use many platforms, but it was word-of-mouth that aimed to stimulate. The idea was to get people talking and communicating about the exhibition in the stream of social media. The playful and fun initial campaign used Perry’s teddy bear, Alan Measles, as a focal point. Alan Measles, took pride of place on the back of Perry’s artwork bike. The playful idea was that Measles was to special to Perry and this meant to leave on the bike throughout the exhibition would be too much for Perry, so stunt doubles of his precious bear would needed. The marketing team filmed a YouTube video with Perry to publicise the competition.  Each bear that was shortlisted had a profile on the museum’s website. The voting was done via Twitter, and this put the votes into the social news feed. This created interest as people who viewed the profile thought the whole concept was amusing and humorous, and it was a great way of making fun of a serious place that is the British Museum. It also touched the hearts of many people as they recalled or shared their childhood memories, and this joyful aspect was relived by a possible visit to the exhibition. These teddy images were also posted on social media sites like Facebook and Twitter, where they were often retweeted and ‘liked’. In addition, the marketing team created posters and badges with Perry’s teddy bear on them and handed them out at University Orientation weeks. The Museum restaurant also had a Teddy Bear afternoon tea that was fully booked out. This fun and cute campaign appealed to its intended audience, and it was covered by major UK newspapers and blogs. At the end of the campaign, 300 bears were entered in the competition, 2,500 votes were cast and the site had 50,000 page views.

Targeting the Essence segment of the UK cultural group the marketing team developed a series of YouTube video of him making his art and it gained over 200,000 views. Other British museum curators established blogs that related to Perry’s work, and audience blogs were also encouraged.

The expression segment was targeted in a different way, such as looking at the craft of his work and working with blogs by the Craft Council Collective. In addition, with every blog post, people were able to join a special lunch time Twitter conversation.

The campaign was a resounding success. It wildly exceeded the target audience with a margin of 100% over the targeted attendance, a 500% increase in shop sales, and a membership increase. Feedback indicated that it helped reinvigorate the British Museum brand, and the campaign displayed a strong audience echo which means long term audience gains.

How can your audience be increased?

Arts Marketing Australia can help update your online approach to your artist product. Contact me to find out more.